Back in the Saddle!

I’m sitting in the dry lab of the RV Hugh R Sharp as I write this. The Scanfish is in the water, the sun is shining, and the coffee is hot. It’s been 7 months since I was last on a ship, and it’s good to be back. Last summer was busy; we began a big NSF funded project on hypoxia in the bay and also mounted a cruise to the Gulf following the Deepwater Horizon oil spill. When we got off that last cruise I couldn’t bear the thought of going to sea again, but now I’m ready. Research cruises are a big part of why I got into this business, and though four straight months of cruises took it’s toll on my last summer, when I’ve been off the ship for a while I certainly miss it.

We’re back for a second year of our hypoxia project, DeZoZoo, which stands for Dead Zone Zooplankton, and though we’re only 2 hours into the sampling, things are going well. That’s not a trivial thing though, because having been off 7 months can mean forgetting lots of stuff. There’s still plenty of time to do that, but instruments are working (so far) and the weather report looks good, which makes it easier to get things done and fix problems. We’ve got a top notch group of scientists on board, and the crew of the Sharp is as good as ever. We spend a lot of time on this ship, and it’s nice to catch up with friends and acquaintances.

Stay tuned. I’ll be posting data tonight once we get our initial survey done. As I write this we are about 6 miles south of the Bay Bridge (38 54.6 N, 76 23.4 W) and the water is VERY fresh, and the deep dissolved oxygen is already pretty low. In fact it’s near zero. Should be an interesting contrast with last year, when we cruised on almost the exact same days. In a few hours we’ll be stopping in Solomon’s to pick up some more scientists and then it’s back to the survey. 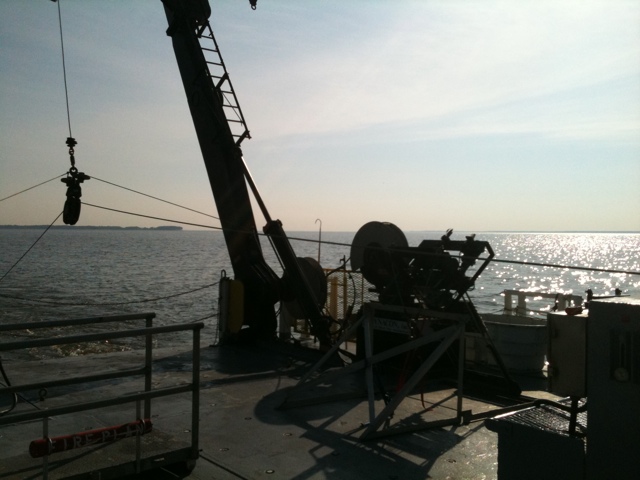 I'm a zooplankton ecologist who studies how individual behaviors and variability affect populations of copepods in marine and estuarine systems.
View all posts by planktoneer →
This entry was posted in Cruises, DeZoZoo. Bookmark the permalink.