Posted on September 1, 2010 by planktoneer

We’re off! We left Cocodrie, LA last night around midnight aboard the RV Pelican and we’re heading west to the Texas border to start sampling (see our current position here).  It’s a long run – almost 24 hours – but we’ve got a following sea which is making for a nice ride and a little bit shorter ride than originally predicted. Most of the gear is doing what it was supposed to do, after a few glitches that have been sorted out, and the weather forecast is decent. All in all, a nice beginning to this cruise. Not to mention the outstanding gumbo we had at the Sportsman’s Paradise Restaurant and Motel in Chauvin. 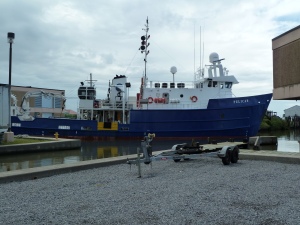 So what exactly is going on our here, you might be wondering? The quick and dirty (pun intended) version, which I’ll expand upon in the coming days, is that a group of us have been sampling in the Gulf of Mexico since 2003, studying how fish and zooplankton are affected by the low oxygen “dead-zone” that is west of the Mississippi River delta on the continental shelf. That work was NOAA funded, and we are currently working on the synthesis of all that work (also funded by NOAA), though we have published quite a bit of the data already. After the oil spill occurred we approached NSF to see if there was money available through their RAPID program to quickly respond to phenomena like the Deepwater Horizon Oil Spill. The idea was that we would build on our existing knowledge in the Dead Zone region to examine how the zooplankton, fish, and oxygen conditions are responding to the oil spill.

Eleven of us are aboard the RV Pelican, and we’ll be mostly mapping the Dead Zone region with various instruments, including our Scanfish with OPC (optical plankton counter), fish acoustics instruments, and CTD casts. We’ve got various sensors on the CTD and Scanfish that can give us an idea of the amount of oil, oxygen, and other “stuff” that is in the water. A second ship will carry trawling and other equipment that will look directly at the animals in the water. 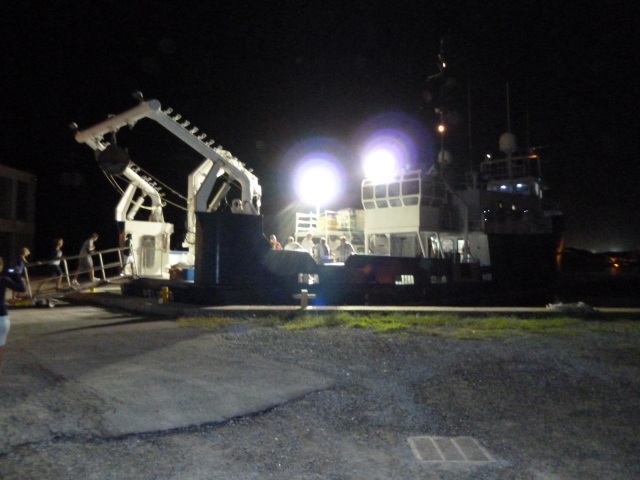 The R/V Pelican at night, before departure.

As an aside, the title of this post came from a T-shirt design on Threadless.com, which you can view here.

I'm a zooplankton ecologist who studies how individual behaviors and variability affect populations of copepods in marine and estuarine systems.
View all posts by planktoneer →
This entry was posted in Cruises, Gulf of Mexico. Bookmark the permalink.